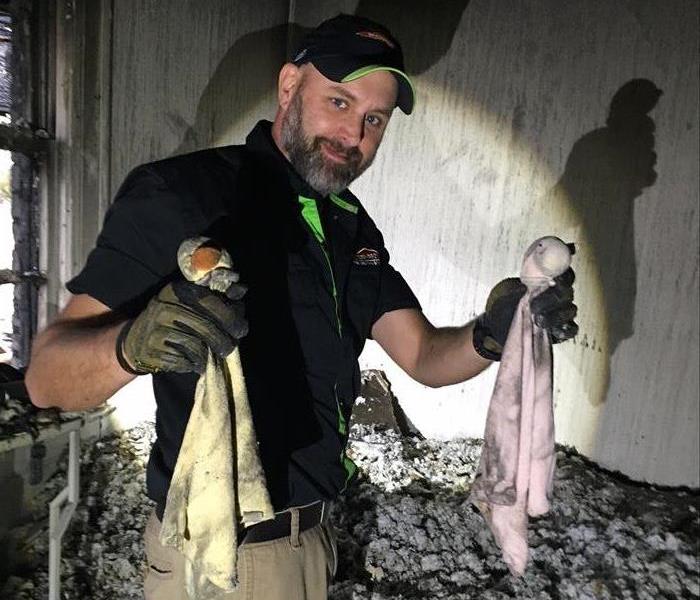 We write often about the ways in which SERVPRO of Belle Meade can meet your needs when faced with a cleanup after a disaster. Whether it’s flood damage, sewer cleanup or any other traumatic circumstance, SERVPRO always hopes to help make it “like it never even happened”. And even though the memories of the winter holidays are receding, one family has reason to continue to be thankful, and we were happy to be a part of their recovery story.

The SERVPRO of Belle Meade team received a call for a family who had suffered a devastating fire in their home the Monday after Christmas. These calls are always difficult, but the team wanted to help this family begin to put the pieces together after the disaster. Sometimes, even in the face of undeniably awful loss, something can be salvaged.

SERVPRO began the assessment with the family about the scope of the cleanup and items of loss. During this time, the daughter asked her mother about two particular items: Lambie and Duckie. This little lamb and duck had accompanied her since she was an infant and carried deep sentimental value. Unfortunately, Lambie and Duckie where in a room with a collapsed ceiling. The two keepsakes sat buried beneath soot. The parents attempted to express to their child that Lambie and Duckie were likely gone.

Aware of the immense value of this lamb and duck to the daughter, Jeff volunteered to rescue them. Beneath the ashes and soot, Jeff searched for Lambie and Duckie. After some time, the effort was rewarded with a successful recovery. However, the toys were covered in grime and dirt and smelled entirely of smoke. Not giving up hope of a complete restoration, Jeff volunteered to return to the office and “make it like it never happened” for this little girl’s toys.

Back at headquarters, a specially formulated solution for cleaning and eradicating smoke odor was prepared. The solution would not harm the keepsakes but could removed the stench permanently. After the technique ran its cycle, Lambie and Duckie were presented back to the family in recovered condition.

We understand how difficult it can be during the time after such events. That is why we hire good people like Jeff Sewell at SERVPRO of Belle Meade. Jeff wanted to go above and beyond a simple job and made sure a family received the best possible treatment. We always promise to do our best whenever you give us a call!